Home Lifestyle Events Keep up with events happening in Lagos this Detty December!

It’s the yuletide season popularly tagged #Detty December, a period to have fun and let off stress accumulated within the year. December in Lagos is usually packed with tons of concerts and events and to avoid missing out on all the happenings around town, I put together a list to help you catch up on all the parte after parte!

The Basement Gig celebrates its 3rd anniversary on December 12th with musical performances by some of your favourite young stars like Oladapo, Neza, Ckay, Oxlade, Joeboy, GoodGirl LA, Terri, Blaqbonez amongst others at The Artican Lounge, Victoria Island, Lagos. Tickets available at www.nairabox.com

Mayorkun returns with “The Mayor of Lagos Fest” set to run from 13th – 15th of December. The event holds at Muri Okunola Park, Victoria Island, Lagos. Tickets available at www.tmolfest.com

BAFEST is a day-long event that showcases African Art, Music, Film and Fashion all under one roof at Eko Atlantic on 15th December. Tickets available at www.bafest.com

Gidi Fest presents WurlD Live in Lagos holding at Hard Rock Cafe, Lagos on the 15th of December. Tickets are available at eclipseliveafrica and loveiscontagious.me 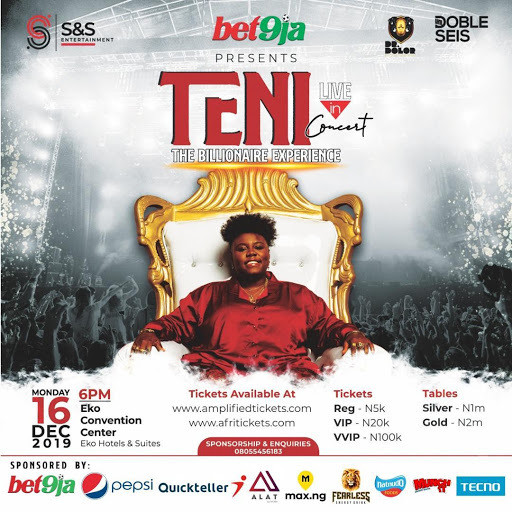 Teni Makanaki presents “The Billionaire Experience” holding at Eko Convention Center on the 16th of December. Tickets to the show are available at www. amplifiedtickets.com and www.afritickets.com

Zlatan is set to headline his first concert in Lagos themed Zlatan Live at the Balmoral Convention Centre, Federal Palace Hotel, Victoria Island, Lagos on the 18th of December. Tickets are already on sale at www.nairabox.com

Kizz Daniel will be having his “Kizz Daniel Live In Concert” at Eko Convention Center, Lagos on 26th December. Tickets selling at www.nairabox.com

Davido returns with a concert tagged “A Good Time with Davido” The concert is set to hold on the 27th of December 2019, at Energy City, Eko Atlantic in Lagos.

Naira Marley presents a concert titled “Marlian Fest” for all Marlians nationwide holding at Eko Convention Centre on the 30th of December. Tickets available at www.marlianfest.com

DICE AILES SUPPORTS #ENDSARS CAMPAIGN WITH NEW SINGLE “NO ONE”